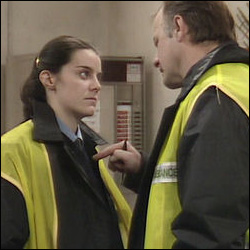 It’s nearing Christmas in Holby, Ewart’s wife, Roz, asks him to meet her at the spot where he proposed to her. She brings out glasses and champagne and asks him to come back – he laughs at the idea, and she walks off. He later rings up and apologises, asking her for dinner next week.

Charlie spots Baz arriving home with a male friend, she has not been at work for two days. Duffy tells Susie she saw Baz coming out of a clinic, and rumours spread fast about her abortion. When Kuba finds out, he goes and sees Baz with a bunch of flowers, she has just been fighting with Charlie. Kuba says he is sorry she lost her baby – Charlie is shocked. Later in the staffroom, Clive is discussing with Charlie a case about a virgin male patient, who is worried about his performance on his wedding night. Charlie misunderstands him, thinking he’s referring to him and Baz and attempts to hit him. Baz comes in and in confidence tells Charlie it was his baby – he is angry, but she does not regret it.

An old man, Arthur, is brought in after collapsing in the street. Arthur, a regular patient, wishes to die, Ponting and Mute bring him in and argue over euthanasia ethics. Arthur’s daughter is a doctor, Harriet, in the department, they don’t get on as he doesn’t take his medicine and he pleads with her to let him die. Harriet agrees, and gets ready to give him an injection, but before she gets the chance, he has a seizure. The team let him die.

Taxi driver Ted tells Megan two passengers of his were hospital bosses who were talking about closing the night shift, Ewart later admits as much, and tells the staff at a meeting, and that he prepares to fight.

* Old man, Arthur, after his wife Maggie dies, he has lost his will to live. He finally has a seizure and the team let him die.

* Virgin male – getting married tomorrow and is worried about his performance on his wedding night. – Clive and Ewart advise him.

* Foreign woman, Maria, brings in her father, who has chest pains – Susie has trouble understanding them.

* Baz treats to a drunk patient.

Park – couple walking dog, we then see Ewart, outside his car, with classical music playing – moves to Charlie on phone;

Charlie : Well it’s been two days since she’s been in now, and I’m getting no reply from her home. Well who’s he exactly? Oh I see, well if you give me his phone number, I’ll see if he’s got any idea, alright.

Ewart : I don’t believe that the fantastic team spirit that has been generated can be disregarded by a mere six months trial, so I’ve decided the battle will go on. So ladies and gentlemen, raise your glasses, the toast is fighting for survival and winning!

Staff : Fighting for survival, and winning!

* Roz is carrying a bag from ‘Oddbins’ – which contains the champagne and glasses.

* While Baz was away, she was replaced by a Dr Simmonds.