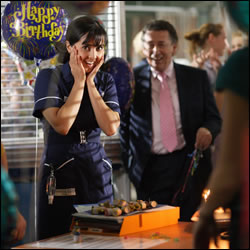 Connie wants Ric to give up his job as Director Of Surgery. He bends the truth and tells her that he has resigned but has to serve three months’ notice.

Annalese comes to work with Michael but she is clearly very suspicious of him. She snoops through his things. However, all she succeeds in finding out is that Michael and Donna have been planning a surprise for her.

Daisha wants to go out for birthday drinks and Mark offers to babysit. A patient notices Mark has a soft spot for Daisha and, although he denies it, gives her an expensive bracelet for her birthday.

* ‘Superstitions’ by Stevie Wonder plays at the beginning of the episode.

* ‘Higher Ground’ by Stevie Wonder plays at the end of the episode.

* You’re like a dog with a bone!’ Ric tells Connie.