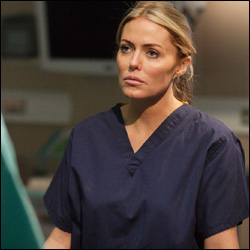 It’s Chrissie’s birthday and, despite Oliver wanting to put some distance between them, he invites her out for a drink to celebrate.

After feeling ill all morning, however, Chrissie disappears to the toilet and takes a pregnancy test – which turns out to be positive. She rejects Oliver’s offer of a drink and instead has dinner with her father.

Ric, meanwhile, discovers a fracture in Maria’s spine and asks Penny to watch over her and keep her parents and Donna informed of her progress.

Maria later awakes, although spirits are dampened when Penny discovers she has no feeling in the lower part of her body – which Penny believes to be spinal shock, from which Maria will definitely recover. Donna struggles to comfort Maria and her parents and an angry Ric accuses Penny of being irresponsible in giving a patient false hope.