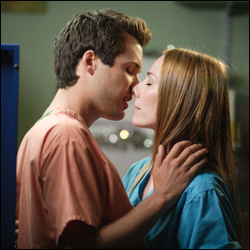 Lauren is desperate to keep a low profile and avoid Joseph. When Joseph finds out that Faye has been charged with Archie’s murder, however, Lauren’s guilt overwhelms her and she confesses all to Thandie – who, in turn, tells Joseph. After hearing Lauren’s confession, Vanessa calls the police and Lauren is arrested.

Oliver’s resolve to party the New Year away, meanwhile, crumbles as he realises the team needs him. After assisting Jac in miraculously pulling off an emergency operation, Oliver takes team playing to another level by getting intimate with her in the locker room.

Elsewhere, Donna attempts to secure a New Year kiss before the night is over and she and Maria decide they will keep an eye out for any talent at the party.

In this article:Chris Murray, HC Series 12

‘Going the Distance’ : Essie worries that she is not being a good foster parent to Parker, but determined to take all the responsibility...