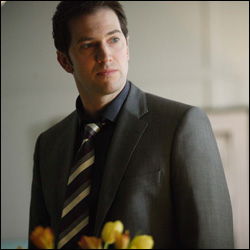 Thandie and Ric’s relationship seems to be back on track this week. Thandie’s brother, Moses, arrives – he has Aids and only days to live – and asks Thandie to help him die. She eventually agrees – only to realise that this has hastened the end of her marriage to Ric. She later declines a job offer from Michael and leaves Holby.

Maria, meanwhile, is determined to get closer to George and asks him to lunch with her parents. However, he snubs her and says he’s busy. His continuing ribbing of Nicky comes to a head with George admitting he is bisexual. Realising he’s not at all serious about their relationship, Maria tells George it’s over.

Elsewhere, Joseph tries to build bridges with Faye and asks her to go on holiday, but she turns him down. Realising how hurt he is, Faye tries to make it up to Joseph but, as he tries to kiss her, she pulls away and leaves him to contemplate the future of their relationship.