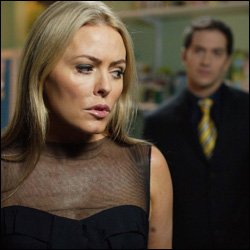 After a massive fight between Faye and Joseph, Joseph storms out of Holby and leaves Faye to be comforted by Linden.

News reaches Holby that there is a hostage situation in the city and that victims will be brought into AAU. As Linden and Faye battle to save the victims, Linden can see Faye is upset and comforts her. The two kiss but when Faye finds Joseph’s tie on one of the victims she thinks the worst.

The doors of AAU fly open; it’s Joseph. He is fine but Daisha has been shot.

Elliot wants to make it work with new consultant Toby Geddes but he finds Geddes so impossible that he explodes at him in theatre. Following the operation, Elliot questions Michael’s role of director of surgery and writes his letter of resignation.

Meanwhile, Penny and Oliver are desperately trying to impress Elliot and Linden by helping in the hostage emergency.