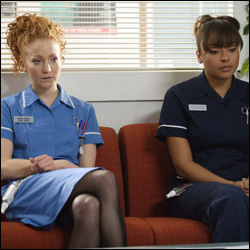 The basement of Holby is at risk of flooding and the mains power is cut out. While Connie and Joseph operate on Elaine, and other theatres are being used, the back-up generator fails.

Interviews are held for the Ward Sister position. Maria gets the job, much to Donna’s disappointment. Tensions between the two soar and they end up stuck in a lift together when the power cuts out.

Staff learn that Terry, a patient admitted for overdosing on paracetamol, was previously in trouble with the police for downloading child pornography. When the crèche children are moved to safety during the flood chaos, Donna’s Mia strays from the group – only to be noticed by Terry.