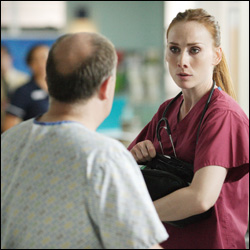 Jac is promoted to acting consultant on Keller, but she clashes with Ric over a difficult patient. When she tells Ric that he’s past it, she has to publicly apologise in order to save her credibility with the team.

Greg discovers that Oliver told tales to Connie, blaming him for Oliver’s botched procedure. Greg gets his revenge when he discovers a patient’s attractive relative is a high-class prostitute and sets Oliver up on a date. Oliver realises he’s blown his chances with his mentor…

Penny tries to encourage Frieda’s skills as a doctor but Frieda tells her to stay out of her life.