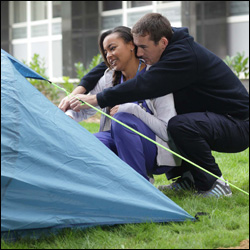 A new day dawns at Holby City and a new alpha male, Antoine Malick, hits the corridors of the Acute Assessments Unit.

Malick would argue that he’s the gold standard of surgeons; however, having beaten up his boss on Day Care Surgical ward, AAU is now his last chance. He’s dangerous, ambitious and rubs Michael and Penny up the wrong way, but sometimes on a violent ward you need a fellow doctor who’s a force to be reckoned with.

Meanwhile, Donna and Kieran swan into work like love’s young dream. Christmas was the best ever, but then Kieran gets a mystery call which threatens their happiness together. He has reasons for going away, but can Donna live with them?

Meanwhile, Chrissie faces a disciplinary hearing and the humiliation of it all makes her question whether to pack in Holby altogether. When Mark learns that her fate may be sealed anyway he turns to the dark side and uses his influence to save her job.