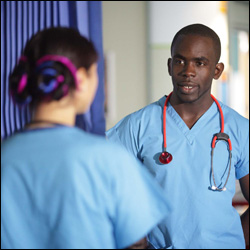 A patient tells Malick that she would rather see a consultant than a registrar. But it soon becomes apparent that the patient is not being entirely open about the reasons behind her request. Furious at being replaced by Ric, Malick accuses the patient of racism and she, in turn, makes a formal complaint against him.

Ric therefore tells Malick that he is not allowed to operate on the patient. However, when the patient goes into crisis in theatre the team needs Malick’s help.

Elizabeth finds herself working on Holby Care. She starts to bond with a young girl, Sarah, who is in for a breast augmentation. Concerned about Sarah’s reasons for being there, Elizabeth involves Ric, and discovers that Sarah has legitimate medical reasons. Michael is unimpressed that Elizabeth has called in his nemesis and doesn’t listen when she tries to suggest that Sarah may be sexually active – information which could be vital to the impending operation. This proves to be the case when Sarah’s operation starts to go horribly wrong. Afterwards, during a heated discussion, Elizabeth tells Ric and Michael that Sarah is in a relationship and is pregnant.

Later, Greg gets more than he bargained for when he tries to involve Mary-Claire in a plan to take Sacha’s mind off Chrissie. Sacha claims to be head-over-heels in love with Mary-Claire. Worried that Sacha might get hurt, Greg comes clean and suggests Mary-Claire may not quite feel the same about him. But it soon becomes clear that a prank is afoot…