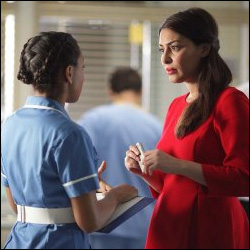 It’s the day of the interviews for the consultancy role and both Jac and Sahira are keen to impress.

Sahira is tested when a patient, whom she’s previously diagnosed with a benign tumour, is re-admitted with serious complications. Will she be able to keep her distance from a dying patient and his deaf son and not jeopardise her chances of impressing Hanssen in her interview?

Malick, meanwhile, deals with a patient who claims he’s been stabbed in a botched burglary. However, when his wife is brought onto the ward from the emergency department, all is not what it seems and Malick is required to use cunning rather than aggression to control the situation.

Dan books a weekend away in Barcelona as a surprise for a tired Chrissie but the overblown gesture misfires. It’s only when Dan speaks to their patient that he learns the way to Chrissie’s heart.

In this article:HC Series 13, Joe Ainsworth