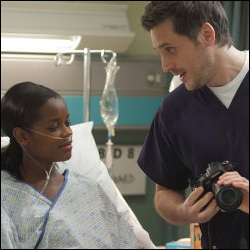 Michael is feeling the heat from his divorce settlement and the pressure to step up and take his Plastics plan to glory is taking its toll.

His resolve to make his plan work at Holby is tested when he realises that its success could mean the collapse of another department. Furthermore, Michael faces an ethical dilemma when his test patient has health complications. Will he go to the dark side in order to secure his future success?

Meanwhile, Greg’s ambition is awakened when a teenager comes in with a rare heart condition. Greg doesn’t think twice before stepping over Sahira to take charge of the case and he works his charm on the patient to get her on side. However, he finds himself becoming emotionally involved in her case and the up-till-now smooth operator finds himself in an uncomfortable position.

In this article:Daniella James, HC Series 13