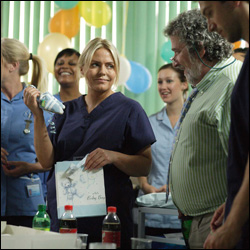 Jac is in fighting mode to secure Ric’s old job. However, while trying to make amends for a row with Chrissie, she fails to do pre-op checks on a high-risk patient and they nearly lose him on the table. With her chance of promotion in jeopardy, she pins the blame on newly returned Chrissie.

Meanwhile, Joseph swallows his concerns about Faye’s mental well-being for fear that she’ll shut him out altogether. When she has a very public meltdown on the ward, he realises she’s become a risk to herself and their unborn son. But can he accept the awful truth and get her formally sectioned?

Donna has to bring her neice, Mia, into work and hide her from Hanssen while getting AAU through a ward inspection. When Mary-Claire and Elizabeth come to the rescue she thinks she’s survived a nightmare day, but then Mia springs one last surprise on her…

In this article:HC Series 13, Paul Gawthorne