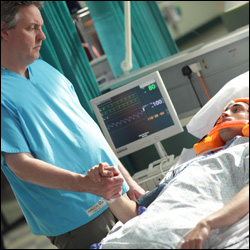 Malick is frustrated by the lack of surgeries coming his way. Ric offers him a chance to assist on a kidney transplant but it clashes with a routine yet vital operation for another patient. Determined not to lose out on this golden opportunity, Malick has a dilemma between his career and his conscience.

Sacha connects with a professional snowboarder who is brought in with a head injury, but Eddi is concerned that he is too emotionally involved.

Elsewhere, can Hanssen keep the advances of a patient at bay and re-establish his dream-team dynamic with Sahira?