The team gather for Frank’s funeral. Max thanks them all for coming; they all have to get to work so only Charlie can attend the wake. Angie is at the cemetery. She speaks to Max, and tells him she knows who killed Frank. She says she didn’t want to say anything before but seeing Frank’s coffin made her change her mind. She gives Max the names but they don’t mean anything to him. He asks where he can get hold of them, and Angie tells them they were brought into A&E the same night as Frank. Max realises that he saved the life of one of Frank’s killers. At the wake, Joan is in the kitchen, crying. Max tells her she has to be strong; she says she wants Frank back. Max gets angry, asking, “Do you think I don’t?” He storms out. Charlie comes in and sees him go; he follows Max outside. He tries to get Max to talk but Max just yells at him. Then he calms down and says he has a choice of three things to do: go back inside and comfort Joan, go home alone and get blind drunk, or go and throw himself off the Jubilee bridge. Charlie says the first two don’t sound too good, and offers to drive Max to the bridge. They walk along it. Max wonders if things would have been different if he’d been at home more when Frank was young, if he and Joan hadn’t split up, if Frank hadn’t got on drugs, if he hadn’t come off drugs. He talks about the fact that they try to save everyone’s life, no matter who they are. Charlie asks him what Angie said to him. Max tells him who Frank’s killers were. He says he wishes he’d let Jon Crowe die, and wonders what he’d have done if he’d known. Charlie says he’d have done his job. Max wonders whether he should go to the police, or confront them himself.

Charlie says he can understand him wanting to confront them -he thinks about what he would do if anyone thought about hurting Louis. They go for a drink. Charlie tells Max that he got Frank back in the end. Max says he feels guilty for telling Frank to confront his dealers; he wishes he’d got a more sensible job than drugs counselling. Charlie says it was Frank’s choice. He says that Frank tried to confront Crowe and Tyler himself, and Max is going to try to do the same. Charlie drives him back home. Max thanks him; he says he’s going to tell the police. Charlie tells him to go and check on Joan. Max agrees. Charlie reminds Max that it’s Amy’s singing debut tonight, and asks if he’ll come along. Max says he probably won’t; he asks Charlie to wish her luck from him.

In A&E, Amy says she isn’t sure whether she should sing tonight, after Frank’s funeral. Tina and Chloe persuade her that neither Frank nor Max would want her to call it off. Amy gets a rude Valentine’s card from Spain – she knows that Sunny must have sent it. A balloon seller comes into reception, and Barney buys one and gives it to Amy.

Patrick throws out the balloon seller. He says that Valentine’s day was invented by shopkeepers as an excuse to get rid of a load of old tat. Holly tells him he’s emotionally dysfunctional and suggests to Amy that Patrick should have bought a couple of hundred balloons, to attach to Patrick so he’d float away.

Patrick goes to treat Alice Baxter, a girl who has got a fishing hook stuck in her hand. He is about to give her an injection of anaesthetic before he can remove it. He tells her it will hurt a little. As he is about to inject it, she kicks him in the goolies and starts crying. Holly arrives; she sends Patrick away. She rubs some cream into Alice’s hand, which will numb the skin in half an hour so that the injection won’t hurt. Holly goes to tell Patrick that the first thing he should have done was to relieve the child of pain. Patrick says that he doesn’t have half and hour to waste and that she could be home by now. He tells Holly to remember that he’s an SPR and she’s an SHO.Tina and Sean discuss what they should do about Max. Sean says he doesn’t mind if Tina stays with Max for now, and helps him through it. Tina says that then she’ll dump him so she can be with Sean.

Josh and Penny bring in Paul Mulgrew, who has been knocked off his bike and injured his shoulder. Josh is sure he knows Paul from somewhere.

The police bring in Davy Miller. The police say they’re not pressing charges, and leave him there. Davey is in care; he is rude to everyone. He is taken to a cubicle and sees Paul; when he is left alone he goes to find Paul and asks his name. He realises that Paul was a cricketer for Wyvern, and one of his childhood heroes. He says he used to go to the matches to help his dad in his burger van, but used to sneak away to watch the match. He tells Paul that he stopped going when his dad died in an accident. He remembers that Paul suddenly stopped playing when he was on the way to play in the West Indies; he says there was a story about him getting into a fight on the plane. Paul confesses that he hit a stewardess on the plane, and that finished his career. Barney finds Paul and takes him to be treated. Paul asks Barney what could make someone suddenly get violent on a plane. Barney suggests claustrophobia.

Adam treats Linda Hastings, who is heavily pregnant and has come out in a rash after putting essential oils in her bath. She has an appointment for a final scan in obstetrics that afternoon; Adam arranges for it to be brought forward, and offers to take her up. They get into the lift at the same time as Chloe, who is taking Paul Mulgrew up to X-ray. The lift gets stuck and the doors won’t open. Paul starts to panic and attack Adam; Adam pushes him against the doors. Linda goes into labour.

Sean tells Barney, who is still treating Davy, that Adam and Chloe are stuck in the lift with the patients. When Davy hears that Paul is stuck in the lift he tells them he thinks he’s claustrophobic and gets violent. Sean and Barney go to tell the others, and they call the fire brigade. Davy runs upstairs until he is above the lift. He uses a drip stand to prise open the doors. Barney finds him just as he has got them open; he startles Davy, who falls through the gap onto the lift below. The fire brigade arrive and Josh goes down to see to Davy; he’s conscious but has injured his leg badly. Davy tells Josh he was trying to help; he thought he could get down to the lift and open a trapdoor in the roof. Eventually everyone is out of the lift. Linda goes up to the labour ward, and her husband arrives in time for the birth.

After Davy has had his leg pulled back into place, he is waiting in a cubicle. Paul goes in to see him. Davy tells him he was trying to help, but made things worse as they ended up being stuck in the lift for longer. Paul says that Davy now knows why he never wore a helmet when batting, why he always rides a bike instead of driving a car, and why he ruined his career by hitting a stewardess – claustrophobia. He asks Davy if he’s got a job now he’s left school, and says he could put in a word for him to get a job as ground staff at the local cricket ground – it wouldn’t pay much but he’d be able to watch all the cricket. Davy says that maybe he’ll get in touch.

Some flowers arrive for Holly – a dozen red roses. Holly smiles but then sees that Patrick is watching her, and follows him into the staff room. She acts nice and asks if he sent them. When Patrick confesses to sending them she gets angry, asking if he thinks it makes up for the pain he caused the girl, or for missing Frank’s funeral. Patrick says he paid his respects to Frank by trying to save his life; he failed and he didn’t need to go to the funeral to be reminded of that. Holly says she doesn’t understand him. Patrick says he maintains a sense of professional detachment with all his patients. Holly tells him to try to maintain that same sense of detachment from her too, and storms out.

Everyone goes to the club to see Amy’s debut. As she is about to start singing Max arrives. Amy sees him, has a word with the band, and then announces that instead of starting with an upbeat number, she’ll start with “Stay with me Baby”; she dedicates the song to Max. As she is singing, Patrick is watching Holly with what looks like tears in his eyes. Max walks out halfway through, and walks down the street alone, crying.

– Davy Miller, a 16-year-old boy, comes in with a cut in his face, later on breaks his leg after a fall

– Linda Hastings, a pregnant woman that is itching, starts giving birth in the lift

– Alice Baxter, a little scared girl that has got a fishing hook stuck in her hand

– Matt Tyler, Jon’s friend, only some cuts after being hit by car

– Leona, a woman in need of psychiatric care, a big bruise on her backside

[It is Frank’s funeral and everyone is standing quietly in the graveyard. The only thing you can hear is some birds flying above them.]

[Max walks out of the club where Amy is singing and he walks down the street, crying.]

– In the graveyard the gravestone next to Frank’s carries the name of the series producer, Alexei de Keyser. 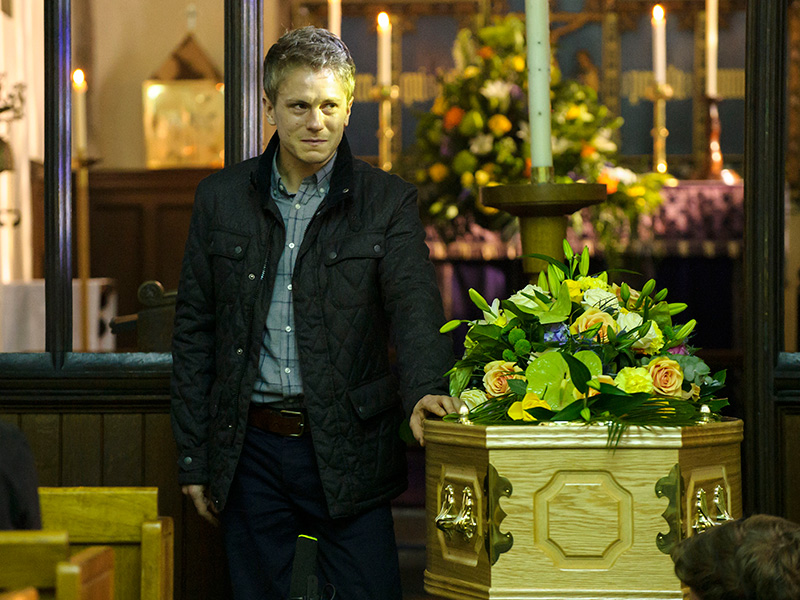 ‘Do Not Stand at My Grave and Weep’ : The day of Cal’s funeral arrives, and when details emerge of how his brother spent... 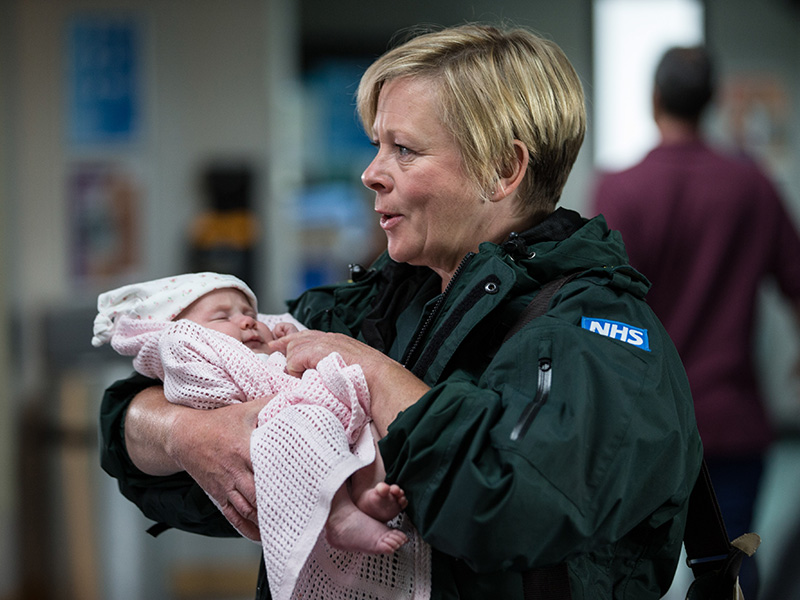 ‘Flutterby’ : Love conquers all for a newly engaged young couple, while emergency nurse Charlie is on hand to help a father and daughter...