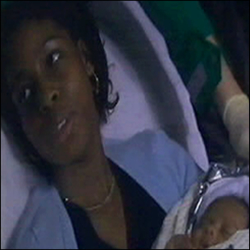 Colette and her colleagues spend her hen night at a restaurant. Meanwhile, Josh is tied to a lamp post in his boxer shorts by the lads. The next day, pregnant Natalie comes to visit Colette, who is overjoyed to see her. Natalie goes into labour early and delivers a baby girl in the ambulance. Complications occur when she hemorrhages, and she is taken to A&E. Colette and Josh are forced to put a hold on their wedding as Natalie fights for her life.

Jack’s brother, Tony starts work as a security guard in the A&E department. Patrick spends the night with Rachel, who gives him a watch as a Christmas present, while he gives her some perfume. Dillon apologises to Spencer for ruining his relationship with his ex-wife – but she later turns up to see him. Philippa Kinross causes friction as new Locum Consultant.

Jason goes to see Anna in a ward and warns her not to go to the police, by blackmailing her by saying that she was acting as a prostitute. Anna begs Chloe to stop seeing him, to her face she agrees, but behind her back, Chloe still sees Jason.

Charlotte Leith Jones is brought in after crashing her car into a tree. Dillon discovers old bruises and she tells him her husband has beaten her, he tries to admit her overnight. Her husband, Simon, tells Philippa Kinross that she is an alcoholic, who makes up stories, and persuades her that he can take Charlotte home. Dillon helps her to leave to a refuge by taxi, while an enraged Simon lashes out a Philipa.

A young girl, Jodie, is brought in after suffering an allergic reaction to latex after kissing a plastic reindeer. Her mother blames Jodie’s ex-convict father, until she realises he is not at fault.

Nikki : You can get some real bargains in Ibiza this time of year though

Comfort : Why don’t you go somewhere exotic like Bali or Caribbean

Chloe : No wait you have to go to Venice – it’s wicked!

Colette : We’ll still get married won’t we? I mean, when she’s better

Josh : Don’t be daft, ofcourse we will (Charlie enters)

Charlie : She seems to have gone into DIC, they’re fighting to keep her pressure up but it’s not looking good (Colette and Josh cuddle)