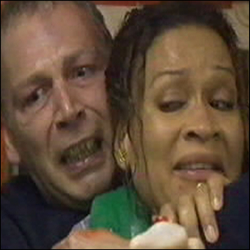 Nikki is off men after being dumped by Jack. Gilly annoys her with her teasing – but Nikki gets her back by telling her looking up Jack’s files is a sackable offence. One of her shouts is to an elderly Polish couple, Madjek and Katid. Katid calls an ambulance for her husband of sixty years when he has trouble breathing, but he does not want to be admitted due to his bad experiences with doctors in the past. Fin and Nikki finally persuade him to come to A&E, where Patrick says his condition is likely to deteriorate. Katid feels guilty for making him come to hospital, so Nikki decides to take them home again – but he dies in the ambulance. Nikki is visibly upset.

Josh and Comfort meanwhile are called to an obese man, Barry, with suspected stomach pains. Josh believes him to be faking, as he has previously been taken to A&E by ambulance, and then make a miraculous recovery – just so as to get a lift to his Social club nearby. Josh teaches him a lesson by planning to give him an enema at his house – Barry admits the truth just in time!

Comfort’s husband is caught tailgating an ambulance and is shouted at by Fin. Fin is annoyed when he mentions that Comfort has called him a ‘hot head’.

At an annual convention for psychics, Madam Rosa is injured after an argument which leads to her crystal ball falling on her foot. Spencer tells her off in A&E for frightening patients by telling them their future.

After previously being called out to a derelict house, where squatter Gemma has injured her head but refuses to go to hospital, paramedics are later called out to the house when it is set on fire. Gemma’s sister, Sal, is taken in with serious burns, in an ambulance with another injured man, Roy. It is only after Comfort and Josh set off in the ambulance, does Fin realise Roy was the arsonist and he tries to warn them on their radio. In the ambulance, Roy gets distressed and throws paraffin over Comfort, threatening to flick his lighter on – Comfort pushes him out the ambulance. Fin tells Comfort how worried he was for her and as they cuddle – Comfort backs off when Fin tries to make a move, but before she can say anything more her husband Rob turns up to see how she is.

Meanwhile, in Resus, Sal dies – Dillon comforts her sister Gemma, who is left with no-one and nothing, and she pleads with him to help her.

* Barry – obese man fakes illness to try to get a lift with ambulance.

Fin and Nikki driving their ambulance through motorway traffic;

Fin : You need to cheer up!

Nikki : Yeah well this is as cheery as it gets today

Fin : You know if it would help why don’t we go for a drink after work or something

Dillon sees Gemma outside the hospital;

Dillon : You really shouldn’t be out here, it’s a cold night. Do you mind if I? (he sits down beside her)

In this article:Cas Series 16, Stephen McAteer