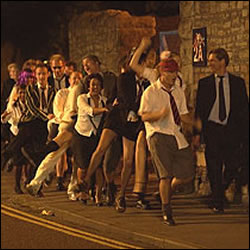 It’s the day of the Christmas party and this year’s theme is an end of term school party. But will there be any childish antics? Josh and Colette certainly aren’t feeling in the party mood. Josh had forgotten their first anniversary and only produced a cheap and tacky card. Colette’s mood worsens when he says he’ll be late to the party – he’s going to be Santa at a charity event. Colette thinks that for now charity should start at home.

Anna is sick of the lack of love in her life and has got herself a date from the personal ads. When he arrives Nikki and Anna are very impressed, he’s very good looking. But Nikki isn’t so friendly towards Jack, the two are still barely talking after Jack’s recent antics with his dad. But after a few drinks the party really begins to hot up…

Jack finally manages to talk to Nikki and he gives her a beautiful, and very expensive, necklace. She still isn’t won round but Jack won’t give up that easily on her. Jack says he can’t get by without her because he loves her. She says she won’t be with him until he stops seeing his dad. This is too much to ask Jack but, just when it seems hopeless, Jack tries one more appeal. Finally, Nikki’s love for Jack shines through and she embraces him. But through her tears she tells Jack this is his last chance, ever. He has been warned…

The girls gather in the toilets for some girlie chat. Lara’s contemplating the last year, Colette’s furious with Josh who’s late, Nikki’s unsure of Jack and only Anna seems content. But the chat seems to invigorate Colette and she heads out of the toilets and straight into some serious drinking and Simon’s willing arms. The pair perform a very close salsa dance.

While most of the team party on, Finlay and Comfort are still on shift. Fin’s anxious to spend Christmas with her but she’s reticent. But after a shift with Fin she’s worn down by his sweet persistence and agrees to Christmas together. Josh’s Christmas is still in the balance. He’s caught up by a medical emergency and arrives at the party very late. He walks in to see Colette and Simon dancing way too close and he simply turns round and out.

The evening’s going better for Duffy and Ryan back at the hospital. Duffy, overcome by seasonal cheer, asks Ryan to move in with her and complete the family. He readily agrees, saying he can think of nothing he’d like more. Josh is quite alone on the dark streets of Holby while his wife continues to flirt outrageously with another man.

Josh though isn’t going to be alone for long. He bumps into Michael, whose wife they’d earlier rushed into A&E, who confides his wife died. Unbeknown to Josh, Michael has been diagnosed with a psychiatric condition meaning he’s unnaturally afraid of being alone. Josh goes to talk to him in his car but quickly realises it isn’t going to be easy to get away. Eventually, Michael offers to drive him to the party and Josh readily agrees.

Meanwhile, Anna’s night has gone horribly. Laurence seemed like the perfect man but then his wife appears and says he’s a serial philanderer. Anna throws her pint over him and goes to join the gang. Lara’s had too much to drink and is becoming emotional about the state of her life. Luckily, Harry is there to support her and, when the alcohol threatens to reappear, takes her to the toilets. Unfortunately for him Beth appears just as he’s comforting Lara in the Ladies. Beth is not amused and again questions just why Harry’s so anxious to help Lara. Will they have a merry Christmas in that household?

Josh starts to get nervous when Michael drives past the party venue and seems increasingly unstable. He says he can’t be alone but at least he isn’t now. To Josh’s horror, Michael’s got his wife’s body in the back seat. He tells Josh they’re all going to go out together … Meanwhile, Colette has taken a spot of fresh air with Simon. The two give in to their passion and make love.

The rest of the staff decide it’s time to start to do a conga and head out. They’re just in time to see Michael’s speeding car crash into the entrance of A&E. As they rush towards the scene, a bleeding Josh crawls out of the car, just seconds before it explodes. All Josh wants now is Colette but she’s still at the venue unaware of Josh’s nightmare. What next for the troubled couple?