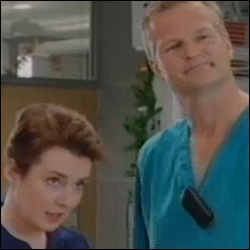 We’re introduced to Darwin Ward being split into two wards, and Keller Ward (for general surgery) has been opened. The consultant on the new ward is Mike Barratt, previously consultant in A+E. Kath Shaughnessy is his ward sister, and Tash Bandara is his new registrar. When Tash sees Kirstie, she greets her enthusiastically but Kirstie obviously doesn’t want to know Tash. It is evident there is some history between them.

Nick apologises to Victoria for their argument the other day, and Victoria grudgingly accepts. Ray asks Kirstie how Damien’s been doing in rehab, and Kirstie says that he hasn’t turned up so Ray says he’ll go and have a word with him. Ray says it’s not a good idea to get involved with people you meet at work, especially patients.

Kirstie asks Danny out but she turns him down and mentions to Kath how nice Danny’s bum is, and is embarrassed when Julie and Jasmine tell her that Kath is Danny’s mum! Despite Ray saying Victoria’s out of his league, Danny asks her out and they agree to spend Christmas together. However, Kath makes him go to Ireland to see his grandparents and when Danny breaks the news to Victoria she is upset and thinks she was just a bet. However, they agree to meet up when they get back.

Nick hasn’t seen a solicitor about the divorce because he still doesn’t want to go through it. He tells Karen he regrets leaving her, but he felt guilty that he couldn’t get her pregnant. He confesses to having a low sperm count. Karen says it’s a relief because she’d thought it was her fault. Nick says there are ways of overcoming the problem and Karen wants to know if he’s saying he wants to have kids. He says that he does eventually but at the moment he doesn’t want a divorce. He says he finally realised that he belongs with her, and tells her that he loves her and doesn’t want to be apart from her again. Karen pulls away and Nick says he wants to spend Christmas with her and kisses her again, but she pulls away again – saying she has work to do.

Victoria is confused at why Meyer helped to save the life of a murderer but he talks to her and says that they have to fight for all human life, and that in a war, doctors have to help both sides. He says they have to learn to cope with losing patients, but says that sometimes the less they know about them the better. He goes to see Tony Smith, (the murderer Victoria was referring to) and tells him he and his brother will both make a complete recovery. Tony thanks him. Meyer replies, “I’m a surgeon. We can’t refuse to operate on anyone. But I so wish that we could have left you two to rot on trolleys in A&E.”