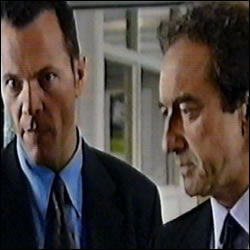 Danny and Victoria discuss the kiss they shared and agree that it was stupid but sexy. They discuss going out on a date, when Jasmine comes round the corner. They pretend to be dealing with hospital business and Victoria rushes off embarrassed – but Jasmine is not fooled, it’s the second couple she’s worked out today!

Tash, Mike and Kath are discussing Meyer’s new position as Clinical Chairman. Mike tells them that when he congratulated Meyer and told him how pleased he was for him, Meyer called him a ‘liar’. Tash is worried that now that Meyer is Clinical Chairman, Meyer can hire and fire on Darwin and she’s not sure whether or not he likes her. Mike jokes that Meyer can now do anything – including deciding sandwich fillings! Tash asks if Meyer really is that great and Mike admits that he is, and while Kath says it doesn’t make him a nice man, Mike says it doesn’t make him a bad man.

Greg is still maintaining an obnoxious attitude, and is making Kirstie’s life really difficult. His wife tells him to stop too, as he’s not helping matters. Kirstie notices a problem on Hannah’s echo-cardiogram, and gets Ray to call Nick. Kirstie gives Nick details of Hannah Phillips’ symptoms, and Greg tells them that she has trouble breathing and is tense all the time. Nick diagnoses Hannah as having a tumour and says they need to operate immediately. Nick tells Victoria to reschedule Meyer’s list, as Hannah must take priority.

Julie tells Jasmine that she wouldn’t bother wearing a uniform if she was Nurse Practitioner, but Jas says she feels like a nurse when she’s in uniform. Julie tells her that she’ll now feel more like a secretary. Tash is giving Jasmine a hard time and insists that Jas books her in to observe one of Meyer’s operations, despite Jas’s protests that Meyer does not allow people to observe. When Tash has gone, Ray warns Jasmine to watch herself with Tash.

People are gossiping about Nick and Karen, and Tash is flirting with Kirstie. Kirstie tells Tash she’ll go to the next party that Tash invites her to.

Hannah mentions that her brother once worked at Holby City, and Greg describes her brother as a ‘moron’ who he hasn’t spoken to in five years. It turns out that Hannah’s brother is in fact Anton Meyer. Nick quickly tells Meyer that the patient with the heart tumour is his own sister and Meyer is clearly shocked. Greg doesn’t want Meyer to operate, saying that he’s ruined his and Hannah’s lives, but there is an evident affection between Hannah and her brother. Greg rips the consent form up and challenges Anton to operate without it and Hannah is left in an awkward situation. Nick talks to Greg in the corridor and Greg tells him that if Hannah dies, Meyer will inherit everything. Hannah explains to Meyer that Greg made it difficult for her to keep in touch with her brother.

When talking to Nick, Meyer explains that he loaned money to Greg and Hannah. Nick tells Meyer that if Hannah dies then Greg will sue and Meyer will face a murder charge. Anton tells Nick that he doesn’t have time for Nick’s over-active imagination and dismisses him. Mike speaks to Anton about Hannah and suggests that Anton ‘assists’ Nick, which Anton clearly does not take too well. Mike asks Anton if he can be sure he isn’t allowing his personal relationship with Hannah to cloud his judgement. Anton says he is not sure and so agrees to assist Nick, and Mike tells him he’s doing the right thing.

Kirstie tells Ray about Damien, who she met earlier and is acting suicidal, and warns him to be careful. Kath tries to find out more about Karen and Nick and hassles Karen. Nick tells Karen about Meyer, who takes Meyer’s side, saying that it is natural that he should want the best for his own sister. Victoria and Danny kiss again, and arrange a date for that evening.

Jas speaks to Julie and revels that she’s hating her new job and is upset by the lack of respect that Tash is showing her. Kirstie says that her and Tash were friends at med-school, but they were in different years. Tash is pushing Jas to get her into one of Meyer’s operations, but Nick explains that Meyer will not allow people in without invitation. Jas is winding Karen up about her relationship with Nick, and Nick and Karen argue about how many people know about them.

Greg won’t let Hannah speak to Meyer alone, but he eventually does. Meyer reveals that he’s angry at her for marrying Greg, but wishes he got to see her. Hannah says she loves Greg and wish that Anton and him would talk but Anton says it would be difficult. Hannah tells her brother that she loves him and asks why he won’t operate on her. Nick operates on Hannah, but is finding it difficult and rushes. Nick is struggling, and Meyer begins to lose his temper and orders Nick to stand down. He then does what Victoria describes as ‘a Meyer’ and saves Hannah’s life. He tells Nick to see him if he has a problem. Nick is complaining to Victoria, then asks Ray and Julie where his ‘wife’ is, presumably meaning Karen. Jas complains to Mike that she hates her new job and that she wants her old job back, but Mike persuades her to give it a few more days.

Nick is furious that Meyer didn’t let him operate on Hannah. Nick accuses Meyer of bullying people and says that Meyer has a huge ego. Meyer says that Nick’s ego put people at risk and that if Nick wanted to work at Holby then he must put up with Meyer. Hannah tells Anton that she knew that he would operate in the end. He briefly touches her hand, then warns Ray not to let any ‘polytechnic trained’ doctors near her.

Kirstie tells Ray that Damien is getting better and Ray is curious about why Damien needs psychiatric treatment. Kirstie warns Ray to not get too attached. Victoria tells Kirstie that she is going out with Danny, but not to tell anyone. They are shocked when Kath talks about ‘those two getting together’ until they realise that Kath means Nick and Karen. Kirstie persuades Tash to ease up on Jas, on the condition that she’ll go out with Kirstie if she does. When Karen hears that Nick referred to Karen as his wife, she’s furious and argues with Nick.

Anton tells Greg that he operated on Hannah, and we learn that Greg is unfaithful to Hannah with the waitresses at the restaurants they own and would have walked off with the money if Meyer hadn’t taken them. Meyer says that he put the money in a bank account waiting for this day and that Hannah can’t run the restaurant while she’s recovering from the operation. He asks Greg not to thank him as he knows that Greg would be lying.

Nick and Karen are arguing on the way home when they see a crash where a woman is trapped in a car. Karen phones an ambulance as Nick fights to free the woman, but he cuts his arm badly and blood is pouring from the wound.

‘What Lurks in the Heart’ : Dylan becomes the source of gossip after Seb’s allegation, but Max and Jez are determined to help him... 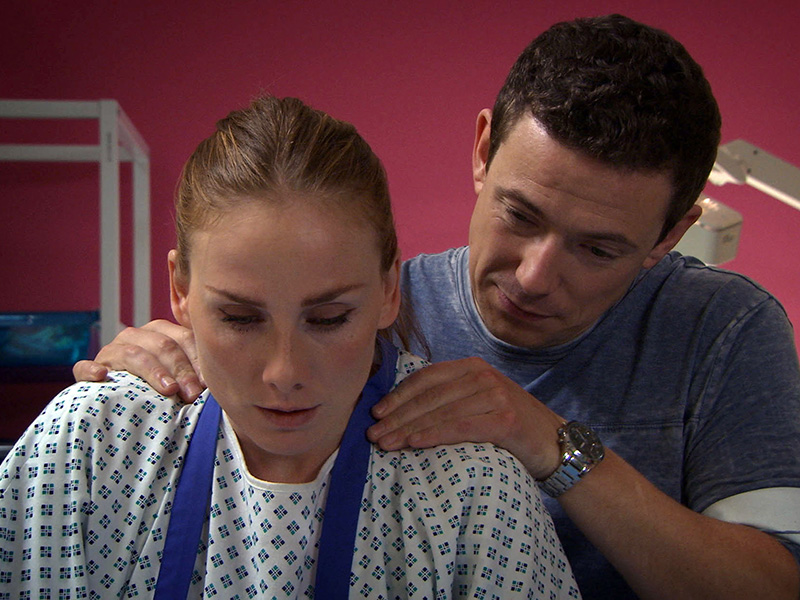 ‘Self Control’ : Jac is getting ready for her delivery date, only to start experiencing contractions – and before anyone knows it, she has...