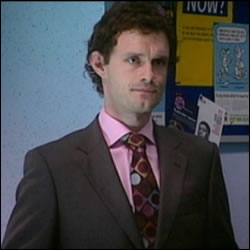 The new Corporate Director, Nathan, starts work and ruffles Harry’s feathers with his new rules. The pair clash and Nathan tells Harry that if he cannot co-operate he will find a Clinical Director who can.

Guppy is still reeling from the attack on his father Jas and tells the Detective that he will not testify for fear of further attacks on his family. Guppy also tells Abs this, who tries to convince him saying the case has already been weakened by Ajeet’s refusal to give evidence, but Guppy is not interested. Abs calls Ajeet and later tells the detective he has persuaded him to testify. Guppy worries when Jas has to go for a brain scan. He realises something is wrong with his father but Jas keeps silent. Guppy decides to look at his records and is shocked at what he finds. Abs tells Guppy that police have arrested Lee’s gang and will charge them because he persuaded Ajeet to give evidence. Guppy tells him he doesn’t care – his father has a brain tumour and will be lucky to last into the New Year. Abs tells Nina the news about Ajeet but she is not interested, saying Abs has done too little too late.

Mother, Avril and grandmother, Kay, of a young boy, Lennard, come into the department. He has superficial burns to his chest and they claim he spilt hot drink over himself. Abs finds other bruises on the boy and later Kay admits to him that she thinks her self-harming daughter may have hurt her son. Lennard and Avril then both go missing. The police and paramedics are later called to their house and discover them both tied up. It turns out Kay has been mistreating them both, however Avril poured hot drink over him as a cry for help to the authorities.

Brothers, Albanian, Arlind and Mirjan are working illegally on a building site when Arlind falls. Their boss, Ed, makes them move him out of the premises, as they are not insured to work there. During an argument in the hospital car park, Ed traps Mirjan’s hand in a car door. Later Mirjan and Arlind agree to report Ed, despite the fact they will face deportation.

A woman, Cissy, picks up someone else’s baby at a shopping centre. The furious mother pushes her away and she falls onto glass. At hospital Cissy is furious with her husband for taking time off work to see her. He reveals to Ellen they have been saving money for IVF treatment. However Ellen delights the couple when a pregnancy test reveals Cissy is already pregnant.

* Nathan tells Harry ‘Nice to put a face to the name’. But behind his back, Harry replies ‘Wish I could say the feeling’s mutual.’

* After harsh words with Nathan, Harry says ‘Are you threatning my role of Clinical Director?’. Nathan replies ‘Yes I believe I am’.