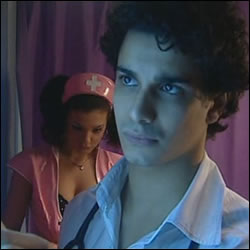 Maggie’s interview for the Consultant position is today. She is sceptical, thinking that Nathan’s candidate John will get the job. Maggie is late for the interview as she is held up with a patient. The board decide that if she is not there in five minutes they will write her off. Maggie does make it and Nathan grills her about hospital quotas. Harry interrupts and tries to defend her. Maggie gives a passionate but forceful answer about patient care. When Maggie leaves, the board discuss her interview. Nathan and Dr Greene think her answer was inappropriate but Harry defends her saying he would prefer someone who is passionate to a yes person. Later, Maggie speaks to Harry assuming she didn’t get the job. Harry winds her up for a bit pretending she didn’t get the job but then reveals the job is hers. Maggie is delighted and Harry and the gang celebrate with champagne.

Ellen is back at work, however collapses on shift. Distraught she breaks down to Abs in a cubicle. He suggest reike therapy might help.

Bride-to-be, Jilly, collapses on her hen-night and comes into the ED. Kelsey and Guppy treat her and discover the slimming pills (which contained amphethamines) she has been taking have caused her to have an enlarged heart. Meanwhile Guppy is not impressed when he is seduced in a cubicle by one of her friends after Kelsey tells her he is a virgin.

An elderly man, Mac, is brought in with smoke inhalation following a fire at his house. Maggie discovers old bruising. Later his grandson, Jake, is also brought in and the team soon realise he has mental health problems. Mac has to face up that he can’t cope with his grandson’s behaviour on his own.

* ‘I don’t know how you can resist him,’ Jilly’s friend, who fancies Guppy, tells Kelsey. ‘I know, everyday’s a battle!’ Kelsey replies sarcastically.

* Ellen tells Abs distraught, ‘Look at me Abs, do you think I can’t see people staring at me?’

The truth about Lev’s past makes Ruby feel uncomfortable. Meanwhile, a surprise visit from her mother at the hospital puts Rosa and David’s fake...

Archie takes matters into her own hands to try and get justice for a wronged patient, and decides to help him escape from the...