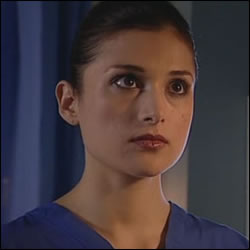 Posh new nurse, Nadia, works her first shift and triggers a war with Kelsey over her lazy work ethic and when she fails to show compassion towards a drunk tramp. Kelsey is angered further by Nadia’s ability to gain male attention with her charm. When Nathan discovers she is the daughter of a rich Greek-Cypriot, who has made a generous donation towards the hospital, he bends over backwards to help her when her car is clamped.

After spending the night with Harry, Selena feels his absence in the department but is hoping to hear from him but Nathan puts the mockers on her new love prospect when he claims flowers Harry sent are from him and deletes his text from her phone, leading to Selena leaving a message on Harry’s mobile to say their night together was a mistake.

Dixie looks put out when Greg kisses Cyd infront of her and announces they are having a night in together.

A trio of abseilers have a race down a block of flats but when one of them, Chris, knocks a mother, Fiona, off the balcony, they claim she jumped so as to not get themselves in trouble. However Chris is guilt-ridden when Fiona’s teenage son is led to believe she commit suicide and owns up.

Two brothers, Frankie and Lee, let off a smoke bomb in an abatoir. Whilst the workers evacuate, the pair inject the meat with herbicide. However boss, Steve, decides to go back in the building and catches them. Trying to escape, Lee electrocutes Steve in the leg whilst Frankie is injured when a carcass falls on him. Back at hospital, Frankie turns up but when he fails to tell the truth about his injuries, he dies from internal bleeding. Meanwhile Steve faces further trauma when his girlfriend, Kirsty, is found to be part of the ‘Animal Freedom’ group and she is arrested along with Lee.

* Abs starts to reveal to Nadia about why he’s called Abs. A nickname, short for asbestos.

* ‘Sunk so low you had to watch?’ Selena tells Nathan, when she realises he saw her and Harry kissing. ‘Next you’ll be telling me you enjoyed it!’ Nathan smirks. She replies ‘I did!’

* When Abs fails to pull a prank on new girl Nadia, she says ‘You disappoint me Asbestos boy!’

* Trying to persuade Abs to help change her tyre, Nadia says ‘Abs honey – I want you to get very sweaty and really dirty for me!’