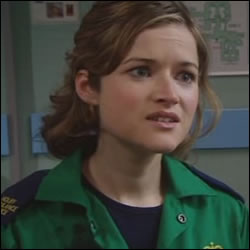 New army consultant LT Col Andrea Petersen arrives and immediately riles Selena by being mean to an overweight patient suffering a heart attack. Andrea gets angry when she finds Guppy treating a patient for Nadia and makes Kelsey do it instead.

Greg admits to Cyd that Andrea is the reason why he found it difficult to commit to her. In resuscitation, Selena and Andrea argue over a patient’s treatment. Andrea leaves resus to find Greg and is stopped by Kelsey asking her to help treat another patient.

When Andrea finally catches up with Greg in the staffroom, she reminds him that he promised to wait a year for her and forces him to choose between her and Cyd. Later, Cyd is left devastated when she spots Greg and Andrea kissing in an ambulance.

Also, [ID 1902]Jeff[/ID] and Dixie pick up an elderly patient, Ella, who hyperventilated when her son tried to take her up in his plane to fulfil a promise to her dead pilot husband. But she is determined to conquer her fear, despite battling lung cancer. She discharges herself from hospital and the paramedics take her back to the plane, where she successfully takes off.

A man, Bill, is injured after falling into a skip of glass as he plays a ‘battle’ game with Joe. Meanwhile when a couple, Mickey and Lisa, come in when he injures his wrist following an argument over an alleged affair, Dixie and Jeff make a bet over whether they will leave the department happy.

* The Charlatans ‘Beautiful Friend’ plays at the beginning of the episode.

* Greg confides in Abs ‘A year ago I thought she was the love of my life – I would have walked through brick walls for her.’