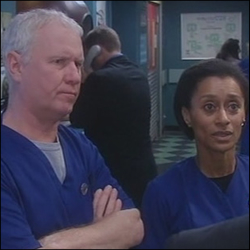 Today’s the day Harry will tell Tess and Charlie which one of them is being made redundant. Tess volunteers, to help Charlie, whose personal problems are reaching crisis point. He has just been called to Louis’s school, from where Louis has been suspended for smoking cannabis.

Ruth and Toby wake up in the on-call room together, which doesn’t go unnoticed by Kelsey. She gossips about it within the department, and Maggie hears. She quizzes Toby, and, discovering that he has moved out of his mother’s house, offers him a room. Toby asks whether she also has a spare room for Ruth, but she doesn’t.

Chrissie Hendricks has blockaded her street, fed up with drivers parking their cars on her road. Her neighbour, Tom Cavanagh, who would prefer a more peaceful protest, becomes involved in an argument with one of the drivers and has a heart attack. At ED, the team discovers that Tom had been self-prescribing medicine, which hasn’t helped his condition, and Chrissie, who administered some medicine at the scene, admits she doesn’t know exactly what she gave Tom, because she can’t read.

Young Matt Berger, meanwhile, is trying to live up to the high expectations of his father, an ex-Marine. The two are out training at an assault course, but when Matt is forced to go down a tunnel, he runs off.

In this article:Cas Series 22, Suzie Smith