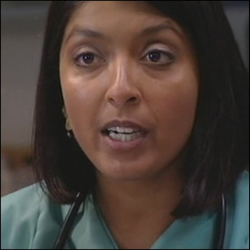 Abs manages to gather some support for a strike in protest at Charlie’s redundancy, but discovers the Union won’t support him. He spearheads a work-to-rule among the nurses, instead, even though Tess begs him not to. Abs, however, is adamant.

Clare and Aidan are living in a caravan while their house is being decorated, but the tensions of living in such a small space are taking a toll on their relationship.

Elsewhere, Jo, a troubled teenage runaway, accepts a lift from a lorry driver, but quickly regrets her decision. She feels unsafe and threatens Don with a screwdriver, causing him to crash into the stationary caravan, trapping a woman in the wreckage.

The work-to-rule affects the whole department, and Ruth ends up out in the field as no nurse will go out in the RRV. At the site of the crash, Ruth makes it clear she is in charge and disagrees over the treatment of the patient, Clare, and insists her method is followed. However, when Clare starts to deteriorate, she has to be rushed to the ED. Dr Zoe Hanna is critical of Abs, rather than Ruth, as he should have gone on the call. She saves the woman’s life, but the doctors now disagree with Abs’s stand.

Kelsey, meanwhile, boasts to Alice about all the handsome guys she met on New Year’s Eve.