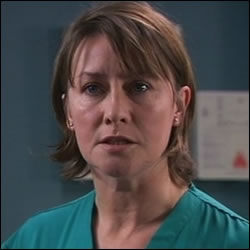 Ruth is still in ITU whilst Harry tells off Noel for gossiping about her.

It’s Snezana Lalovic’s first day as a paramedic. A hungover Dixie is in no mood to deal with a new member of staff on an obervation shift and deems Snezana too serious.

Two teenage boys Dexter and Jugg, along with Jugg’s younger sister Molly head into woodlands hunting for werewolfs. Whilst there, they swallow some of Molly’s mother’s medication. An elderly man, Stanley, has wondered from his carehome into the woods and scares the children. Dexter stabs him in the chest whilst Molly falls and injures her leg. The two boys run off without her, but call 999.

The paramedics turn up at the wood and end up getting stuck in mud. Thinking the call is a hoax when they can’t find anyone, they eventually head off. On their way, they discover Stanley collapsed at the roadside and take him in. Maggie treats Stanley and is angry at the carehome for their poor reputation. Meanwhile the boys turn up at the ED as Jugg has injured his arm. Staff realise they were involved in the woodlands case and Jugg eventually admits his sister is still out there. She is found and brought in and the team discover the beta blockers she swallowed have caused her condition to deteriorate.

Meanwhile Toby has pulled a sickie and goes to the pub with Maggie’s pregnant daughter Joanne. It’s an escape from the pressures of the Emergency Department. Maggie, Tess and Harry are all concerned that Toby has lost his confidence since Ruth’s suicide attempt.

Whilst in the pub however, Joanne goes into labour. He tries to deal with the situation and calls for the paramedics, but there is a delay. Joanne’s contractions are coming quickly and Toby has to act, however the baby is trapped with a prolapsed cord. Toby calls Tess, who advises him what to do till the paramedics arrive.

When they eventually arrive, Dixie and Snezana conflict over the best course of treatment. Snezana gets the opportunity to prove herself, delivering the baby girl single-handedly. Dixie can’t help but be impressed, and asks where she learnt how to do that. Snezana replies that she is used to working without equipment, but won’t give anything else away.

Joanne and her newborn are brought in and Maggie is miffed that she was the last to know what was going on. Meanwhile Harry takes Toby aside offering his support and gives him time off compassionate leave. Harry considers making Ruth’s diary public – Marilyn warns him if he does go to the press, his job will be on the line.

* Stanley Cruikshank – stabbed in the chest.

* Kelsey winds up a hungover Dixie by singing ‘Rehab’.

* Jeff and Dixie have been calling Snezana ‘Susannah’ all shift till they realise their mistake from Adam.

* Trying to persuade Harry not to publish Ruth’s diary, Marilyn says of Ruth ‘She’s a flake!’

* The owner of the pub warns Toby the baby is on the way, ‘You’ll be wanting hot water and towels’ she advises. ‘No – ambulance!’ he says bemused.

* Negative Toby tells Harry ‘It’s me – I’m useless at everything’.

* Kelsey describing Toby assisting in Joanne’s labour ‘He was doing no more than he should have been doing – he was just doing it drunk!’