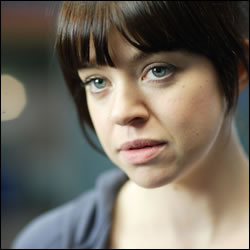 It’s Ruth’s day off and she is alone in her room and again on the verge of suicide. She goes for a run but witnesses an accident and pulls one of the victims out of the way of a motorbike. Her subsequent care and treatment of those involved is praised by her colleagues, and offers her a glimpse of hope.

In ED, Jessica and Adam are drawn to each other, unable to keep apart. However, an innocent mistake in resuscitation reveals Jessica’s secret to everyone. Jessica retrieves Sean’s watch, which has fallen off in surgery. When he comes back for it, her simple act speaks volumes, and it is clear they are husband and wife. Adam is hurt and furious, while Zoe is astonished.

Meanwhile, a father (played by Alexander Morton) watches as his Down’s syndrome daughter has to have life-saving surgery. He also has to let go and allow his daughter’s boyfriend to marry her.

Elsewhere, Toby gets an ear-bashing from Sean, but later receives a kiss from Joanne, leaving him on cloud nine.Ruth, having coped well with her day and having saved a patient’s life, ends the day smiling.

In this article:Cas Series 22, Sasha Hails