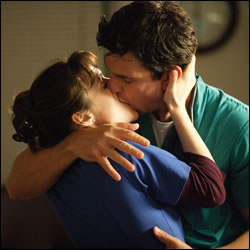 Marilyn and Zoe both try to persuade Charlie of the benefits of opening a private clinic for minor injuries in the hospital – but Charlie’s having none of it.The deliberate actions of a broken-hearted woman cause a serious road traffic collision [RTC], with far-reaching consequences for a couple off to Las Vegas for their wedding. Later, the woman’s ex-husband is at the ED with someone else, and the ripple effect continues as he finds out his girlfriend has been hiding her profession as a prostitute.

Lol is brought into the ED with a head injury. His fiancee claims he’s “possessed” – his accent and speech have changed dramatically. Ruth deals well with the couple, and advises them of the best course of action. She is proud of what she achieves, and even manages to join in some banter with her colleagues.

Adam and Jessica snipe at each other all day, but at the end of their shift they agree to stop bickering and work as professionals. However, instead, they fall into one another’s arms.

Toby, his mind elsewhere, misplaces his stethoscope. Snezana secretly slips it into her bag.

There’s a grudging respect between Charlie and Marilyn at the end of such a tough day. She offered her help as a nurse and praises the way the department handled the RTC. But with Charlie refusing to countenance her idea of a private clinic, her veiled threats about his future still hang in the air.

In this article:Cas Series 22, Jeff Povey