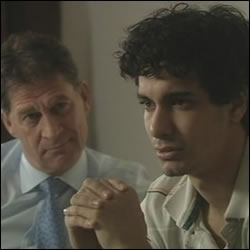 It’s judgement day at Holby ED, as the department awaits the findings of the investigation into the handling of the bombing. Heads are going to roll, and Tess, Charlie and Nathan are first in line. Nathan is determined it won’t be him and doesn’t hesitate in blaming Charlie.

Problems are compounded by the day’s newspaper headlines revealing utter chaos within Holby – someone has spoken to the press and rumours are rife as to who it was. Alice uncovers the truth and plucks up the courage to confront the whistleblower.

Meanwhile, a disillusioned and desperate Guppy goes on a mission to bring Harry back from Westminster, convinced that he is the answer to Holby’s problems – but Harry is far from pleased to see him and sends him away.

A young single father, David, is forced to look at his own behaviour. Struggling to deal with the responsibility of his teenage daughter, he is found to be the cause of a major RTC. Everyone is stunned to discover his daughter, Suzie, trapped in the back of his car.

Also in ED, the team struggle to find a bed for a patient and the elderly gentleman ends up in a corridor. His daughter, Valerie, becomes more and more upset, faced with the prospect of watching her father die there.

Disillusioned after a hard day, Josh returns home to discover Maggie has surprise visitors for him – Devika and Sajani.