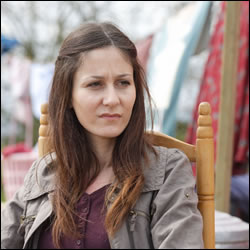 Suspicious of Snezana’s recent behaviour, Jeff decides to follow her and ends up at a settler’s camp full of illegal Serbian immigrants. A shocked Jeff discovers that Snezana has been treating the entire community, and decides he can’t stand by and watch her put herself and the immigrants in danger.

Lucas, meanwhile, has regained consciousness and a delighted Adam goes to tell Jessica the good news. He declares his love for her, but she pulls away saying that she wants to stay with Sean – family must come first.Branka, a cleaner in a residential care home, confronts her son about his suspicious behaviour. She finds an air pistol in his bag and, in a struggle between them, Branka gets shot and a care patient is knocked to the floor. Afraid that the police will catch up with them, Branka and Goran head for the settler’s camp that Snezana has been helping. Branka collapses but Jeff manages to save her by improvising with Snezana’s illegal supplies. Jeff and Snezana argue and she reveals that she has a 12-year-old daughter back in Serbia. Jeff makes a pact with Snezana to keep her secret – if she destroys all of the medicine.

Elsewhere, Marilyn asks Zoe to lie on oath when Maggie’s case goes to court. She attempts to bribe Zoe with a career proposition but Zoe declines. Later, Marilyn spies Zoe flirting with Sean and puts two and two together. She threatens to disclose their affair to the board if Zoe doesn’t co-operate. Backed into a corner, Zoe is forced to agree to lie in court.

In this article:Cas Series 22, Dana Fainaru