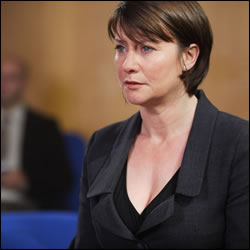 Tensions are running high as Maggie’s court case begins. Charlie is confident that she’ll be cleared but Maggie starts to doubt herself. In court, things start badly when Simon lies under oath.

Charlie realises that Simon must have made another file – one that would prove that Maggie ordered the test and would put her in the clear. He despatches Noel to find the missing file but no one seems to be able to lay their hands on it.

Elsewhere, Marilyn tells Zoe to stick to her story, threatening to tell everyone about her affair with Sean if she doesn’t. Zoe feels she’s has no choice but to do what Marilyn says.

Meanwhile, a young boy is brought in with cuts to his body and Kelsey realises he’s panicking because he can’t hear. She asks Big Mac to find someone who knows sign language and, much to Kelsey’s amazement, Big Mac begins signing with the boy.

Later, when Snezana’s asthmatic friend, Marko, begs for drugs, she refuses to treat him, telling him to go to the Emergency Department. Later, Jeff and Snezana are called to a quarry and Snezana is distraught when she finds Marko trapped in a truck, amid falling rubble.

Back at the court, during a break, the dead boy’s mother turns on a distressed Maggie and accuses her of killing her son. Back at ED, Jessica finds a file that might come in very handy for Maggie, but is it too late?