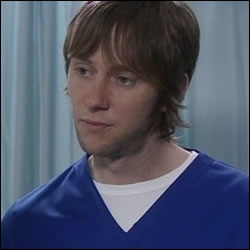 Harry continues to impose his new money-saving policy of “no inappropriate attenders”. The department is running efficiently and all targets are being met in terms of waiting times, but Abs isn’t happy. He is concerned that the “ship them in, ship them out” approach goes against everything he stands for as an ED nurse and especially as a mental health nurse. In some cases, he needs more time to get to the root of a patient’s problem.

One such patient is Clare, whom Abs feels would have benefited from more time to tell him about a problem. Clare is discharged and returns home with her husband, Michael, but later that day she is rushed back to ED with serious lacerations all over her body. Abs recognises her and goes to deliver the bad news to Harry. He discovers that Michael is to blame for Clare’s injuries and feels terrible that he didn’t manage to discover the truth behind her earlier visit – she was clearly looking for help. Abs demands that Harry withdraws his policy and, reluctantly, Harry agrees, but insists that the department has to save money somehow. If it’s not by cutting resources, it might have to be through redundancies.

Meanwhile, Adam tries to teach Toby the basics of intubation on a dead body, having been disappointed when Toby failed to intubate a patient in an emergency situation. He decides to take the young doctor under his wing to give him the expertise he desperately needs. He commandeers a dead body and sets about his unorthodox training methods. The department is divided over the ethics of his actions.

Josh is stunned when he discovers Devika and Sajani are going back to India. Privately, he is devastated they will be returning to India as soon as Sajani is well enough to travel.

In this article:Cas Series 22, Jason Sutton