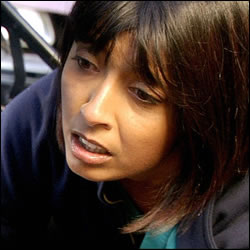 Zoe arrives for work to find Sharice waiting for her. Believing the young girl was sent by Abby as emotional blackmail, she walks away. Abby later wakes up and finds her daughter is missing.

Alex, meanwhile, arrives at ED as Adam has booked him in for an operation. The brothers, however, clash over the op and Alex is not sure he wants to go through with it.

Having finally found Sharice, the family ends up at a scrap-yard. Sharice, having answered her father back in the car, escapes, and Abby follows her. Chaos ensues, as Abby tries to protect Sharice by hiding her in the boot of a scrap car. Finn chases after Abby, but she attacks him in self-defence with a large spanner while trying to escape from him. Finn catches up with Abby, but they both end up fighting for their lives in resus as a result.Sharice, meanwhile, is left for dead in the boot of the car, which is waiting to be scrapped. In resus, Zoe frantically tries to establish where Sharice is.

Elsewhere, Tess tries to get hold of Jessica and is concerned that she is not at work. An upset Jessica, meanwhile, is at home watching a video of her children. Maureen, her mother-in-law, turns up to tell her the new owners of the house will shortly be moving in and produces a contract that Sean tricked her into signing before he left. Maureen refuses to listen to Jessica’s pleas, however, and insists she hands over the keys.