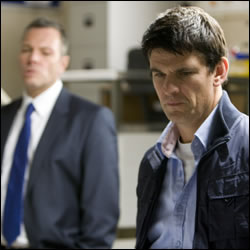 Adam is devastated following Alex’s death and wants to prove that Jordan should have treated his brother, despite the Advanced Directive. He challenges Jordan’s actions and raises the issue with both hospital management and the coroner’s office. Jordan must prepare himself for the inevitable enquiries, but remains defiant.

Later, Adam returns to Alex’s home, where he discovers things he never knew about his brother. While watching the video message his brother left him, he starts to see more clearly and steels himself to go down to the morgue – where he is joined by Jordan.

The men finally talk and Jordan echoes Alex’s words – that Adam cannot blame himself for Alex’s disability – and that there are some things in life that are out of their control. Jordan, however, knows he still has to face the prospect of his own uncertain future.

Meanwhile, Sharice is discharged from hospital and is reunited with Zoe, and Jessica discovers that she is being housed on the Farmead Estate.

In this article:Cas Series 23, Dana Fainaru