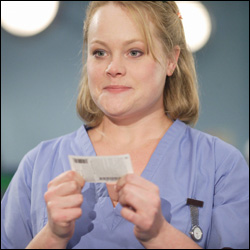 Adam witnesses Jordan freeze in resus. Later, Adam is affected by a death at the hospital and Jordan tells Henry that he believes Adam is too emotionally unstable to work in such a high-pressure environment and that he should be moved to cubicles. Adam is furious and responds by telling Henry that Jordan is unfit to work in resus. Jordan in the meantime decides to self-medicate.

Kelsey is thrilled to have won £50,000 on a scratch card and delivers a few home truths to colleagues as she hands in her notice. She is furious, however, when she discovers that she was set up by Jay and that the cards were a joke.

Meanwhile, Zana’s daughter, Maja, visits Holby but alarms her mother after disappearing with Louis to Zana’s plush but fake apartment. When the real owners return home, Zana is forced to reveal that she really lives in a bedsit, showing Maja, Louis and Charlie the sacrifices she is making in order to finance her daughter’s education.