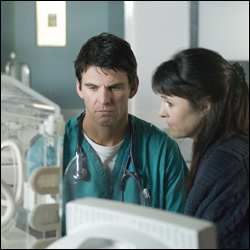 A frantic Jessica arrives in the Emergency Department and, when Harry is transferred to Intensive Care, reveals to Adam that he may be Harry’s father. Adam rushes to Jessica’s side demanding a DNA test – he has to know for certain whether Harry is his son.

Later, Adam is deeply affected when his patient, Margaret, dies. Edward arrives at ED to pay his last respects, but can’t get through security as a number of journalists (including John Sergeant) are waiting outside. When Edward finally gets to see Margaret’s body it transpires that he is Amber’s father. But he is reluctant to get involved with his daughter as his wife doesn’t know Amber exists. This makes Adam realise the DNA test is not important and that he wants to stand by Jessica and Harry regardless, he rushes up to the ward to tell them.

Meanwhile, Jordan reveals to Adam that he is dying and waits on tenterhooks to see whether Adam will tell Henry. Jordan is surprised when Adam keeps the information from their boss and offers Jordan the chance to work side by side in the ED.

Tess lets slip that Alice and Curtis are back together and the gossip quickly spreads among the staff, including the paramedics who discuss it on a shout, unaware that one of Tony’s mini soldiers has overheard. The young boy tracks the couple down and takes a photo of them kissing to send to Tony – the secret’s out.

In this article:Cas Series 23, Daisy Coulam