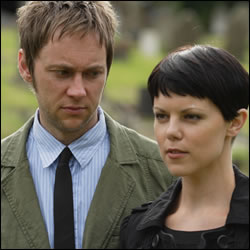 When Adam hears that Nick Jordan received a large bonus to join Holby, he sets about spreading the gossip. Meanwhile, Charlie is stunned when Marilyn Fox returns to work and is visibly friendly towards new boy Nick. Later, Marilyn presents a piece of equipment to the team and reveals that Nick generously bought it with his bonus, and Adam feels humiliated.

Meanwhile, it’s the day of Stacey’s funeral but Abs can’t bring himself to attend. When Abs treats a patient who reveals he was abused as a child, he realises he must go and pay his respects. At the funeral, Ellie tells Abs that, just because he couldn’t help Stacey, doesn’t mean he can’t help others – but Abs says he’s made up his mind, he’s leaving the hospital.

Still struggling with her own emotions following the accident, Dixie suspects that Jeff is refusing to accept any of the blame for what happened. When the pair attend a shout where a teacher has been beaten by a man who suspects him of abusing his brother, Dixie takes charge of the situation despite being confronted by a crowd of people. Is the old Dixie back?