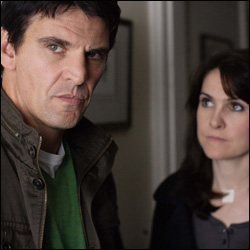 Adam and Jessica struggle to keep their personal and professional lives on track after the tragic events of the past few weeks.

It’s the week after Harry’s funeral and Jessica is finding it increasingly difficult to live and work with Adam as he reminds her so much of everything she’s lost. When Jessica’s long-lost friend, Linda, turns up at the Emergency Department with an injured arm, she outlines a proposition to Jessica which gives the grieving mother some food for thought.

Elderly patient Mrs Bullock, meanwhile, is brought into the ED distressed and disorientated by a disturbing vision of a clown. Could her condition have anything to do with the energy drinks she’s been consuming?

Dixie is delighted when her father, Arthur, turns up out of the blue but saddened when he tells her some unexpected news. When Arthur sees Dixie and Jeff sharing a joke together and tells Dixie he’s glad she has a supportive boyfriend, something stops her from correcting his mistake.

Dog-lover Dom is surprised to be on the receiving end of a vicious attack from reputable businessman Brian, until Brian reveals that Dom’s dog had previously mauled his daughter. However, Dom might just hold the key to the family’s rehabilitation.

Meanwhile, it’s the day the F2s find out their exam results and Noel holds firm as they each try to wheedle the results out of him.

In this article:Cas Series 24, Mark Catley