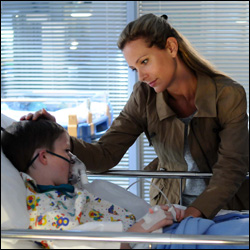 Ruth faces a health emergency of her own while Tracy Shaw (Coronation Street) and Mark Jordon (Heartbeat) are among the visitors signing into Holby City hospital.

Taken into casualty, Ruth is mortified to have to be treated by her colleagues. She swears Tess to secrecy over the abortion pill, despite knowing that Jay is panic-stricken. When her condition stabilises, Ruth admits that she was pregnant and she and Jay share a tender moment. But when Sarah Evans tells Ruth that she must remain focused if she wants to work as a surgeon, Ruth has to make a decision between her career and her man.

When Tim arrives at hospital with his son, Neil, who has been injured in a boating incident, and stepson Ronan, the attention quickly turns to the unhurt Ronan when he starts coughing up blood. Ronan’s mother, Jane, is desperate with worry as Ronan has previously had leukaemia. Tim has some explaining to do when it’s revealed that both boys have measles and Jane discovers that Tim never had Neil immunised.

Meanwhile, Polly realises it’s time to tell Alistair that they’re friends and nothing more and Zoe finds out some information about her new boyfriend, Joel, which horrifies her. Finishing the relationship immediately, Zoe is shocked to learn that Joel has stolen the memory stick containing patients’ data in order to bribe her into seeing him again. Could the feisty medic be heading for more hot water?