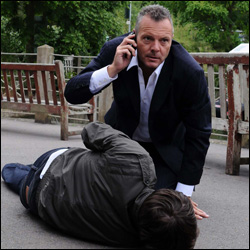 There are some nasty Halloween surprises in store for some of the staff of Holby City hospital.

Adam and Henry are furious when Zoe reveals she’s lost a memory stick of confidential patient data. She’s reluctant to explain how the data went missing – it was stolen by her much younger ex-boyfriend, Joel – but assures them she can retrieve it by the end of the day. Henry gives her until 4pm or she’s fired and things look very bleak when Zoe totally mishandles the situation with Joel. Support, however, comes from an unexpected source when Jordan steps in to help out.

Adam, meanwhile, is under pressure – there are patients to treat, budgets to write and Zoe has disappeared. Jessica is disappointed when Adam declines to help with the children’s Halloween party that night and the stressed medic is forced to choose between putting his family or work life first.

Jeff’s suspicions about Alistair grow when he and Polly are called to a shout and find Alistair standing over an unconscious body at a factory. Jeff is forced to apologise when it turns out Alistair had nothing to do with the accident but warns him to stay away from Polly. Later that night, Polly is petrified to find that Alistair has broken into her flat with a carved pumpkin and a bottle of wine. She’s even more terrified when he demands to know why she’s cheating on him. A shaky Polly is forced to tell Alistair she loves him.

Back at the hospital, there’s a mystery man in the department asking for change, cadging cigarettes and talking about God. Tess and Adam ask him to move on, but there may be more to him than meets the eye.