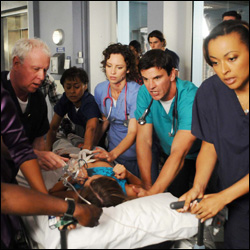 Michelle Collins guest stars as the distraught mother of Simone, a young victim of a college shooting incident, in this feature-length first episode of the new series of the long-running medical drama.

Holby City’s laid-back staff nurse Donna is catapulted into the Emergency Department (ED) to help out during the traumatic events, while new nurse Mads joins the team as its latest regular. It’s her first job since leaving Pakistan and Mads tries her best to understand instructions but struggles with the stronger regional accents, causing serious problems later on.

Jeff and Dixie treat Maria, who has an injury to her arm. Jeff and Maria flirt and arrange to meet later at Holby College where she works. Dixie pales as she realises what’s happened – it’s not a serious wound, but Maria has been shot.

A jogger is also brought into the ED. It soon becomes clear that both the jogger and Maria have been shot with ball bearings fired from an air rifle. The staff begin to worry – could the shootings be linked? Noel is further concerned when he finds sinister footage on the internet suggesting worse is to come.

The incident comes to a head at Holby College, bringing terror right into the heart of the fully stretched ED. Seen through the eyes of the team in the emergency department and the victims’ traumatised families, the incident tests the team’s courage, expertise and, ultimately, the strength of their bonds with each other.