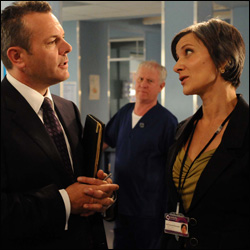 Jordan puts his neck on the line while Ruth and Jay perform a risky job swap.

Jordan tries to rally his troops as the day of the inspection arrives. But he is concerned when he recognises Charlotte, the inspector. Things look even worse when a multiple casualty incident pushes the Emergency Department to breaking point once again.

Jay is perturbed when his grandmother is admitted to the ED – he has led her to believe he’s a doctor. Jay persuades a reluctant Ruth to do a job swap and pretend she’s a nurse. The deception goes undetected until Jay is expected to perform a dangerous procedure. Will he go through with it in front of the inspector?

The day’s events make Ruth realise that she still has feelings for Jay, but it may be too late when she sees him kissing Polly.

As things go from bad to worse, Jordan offers Charlotte his resignation in order to save the ED. But when a patient crashes in the department, and all the CT staff are tied up in operations, only he has the surgical skills to save him. Will Jordan operate when he’s not cleared to do so, and can the team finally pull together to save their boss and the ED?

In this article:Cas Series 25, Ellen Taylor