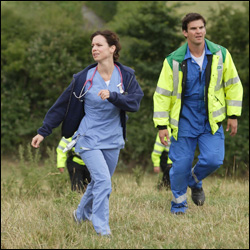 Fraser, a whip-cracking management advisor (played by Fiona Allen) throws the ED into mutiny; Warren catches onto the tension between Adam and Kirsty; and Ruth continues her colleague-trampling quest to further her career.

Ruth arrives at the ED ready to show the world just how in love she and Edward really are. But she’s quickly put on the back foot when her patient flow advisor, Fraser, admits to having previously worked with Edward. Ruth is worried that Fraser knows the truth about Edward’s sexuality.

Meanwhile, Kirsty is thrown into panic when she learns that husband Warren and daughter Nita have been involved in a horrific car crash. Adam’s quick thinking sees the safe recovery of Nita and she is brought into the ED. But when Nita admits to meeting Adam before, a suspicious Warren realises the colleagues have become a little too close and tries to drive a wedge between them. Adam shies away from intimacy with Kirsty, knowing that their feelings can never amount to anything.

Jay starts a petition against feisty Fraser and her bureaucratic pen-pushing but is horrified to learn that Zoe changed the header from Fraser to Ruth. The petition is now about ousting Ruth, not Fraser. Jay quickly tries to dispose of the evidence, but he is caught red-handed – much to Ruth’s hurt and dismay.

A surprisingly sympathetic Fraser recognises ambitious Ruth as a kindred spirit and warns her of the difficulties of leading a double life. Feeling the effects of the day, Ruth confronts Edward and tells him they should come clean about their sham marriage but Edward is adamant that it would end his career. Ruth reluctantly agrees and, watched by a thoughtful Jay, they walk out hand in hand…

In this article:Cas Series 25, Tahsin Guner