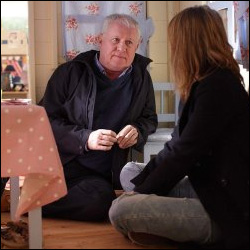 Driven to tears, Jay finally faces up to his problems, and there’s a new doc on the block.

Jay is on tenterhooks waiting for the results of his ultrasound but just getting through his shift seems impossible when his nan, Maryam, shows up, having scared off another carer. He’s struggling to concentrate and is also under pressure to visit Ruth. When his results show he does have cancer, Jay is forced to admit defeat and tearfully tells Maryam she’s going into a home while he helps a “friend” sort out his problems.

Jordan is interviewing for Ruth’s replacement and Miriam thinks that she has just the person. She calls up Dylan Keogh, who reluctantly agrees to meet her, but the bus he’s on crashes en route. Dylan just manages to free Hannah when the bus explodes. He ends up at the ED along with some of the other victims, including the driver, Filip. Jordan is unable to diagnose the problem with the driver, but an unwilling Dylan makes a “eureka” diagnosis.

Meanwhile, Hannah has discovered that she’s being replaced by a younger, prettier sales rep, Cheryl. Her boss, Ant, insists she mustn’t rush back to work. Looking in the mirror, Hannah realises why as her face was severely injured in the bus crash. She is filled with hurt and fears that her looks have been lost for ever.

Ruth is overjoyed about the prospect of seeing Jay and escapes from the pysch ward. She heads out shopping, planning their new life together. Charlie discovers that she hasn’t been taking her medication but can he track her down before she gets arrested when shops become suspicious about her credit cards?