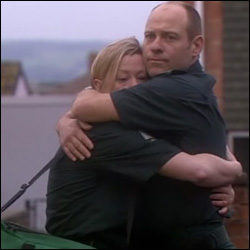 Adam goes to great lengths to prove that his patients come first and Jeff and Dixie clash over a troubled teen.

Jordan is on one of his efficiency drives and praises Adam for processing patients so quickly. But, frustrated that he’s losing focus on the patients, Adam sets out to prove Jordan wrong and spoil his statistics. When an elderly gent with terminal cancer is brought in, Adam goes out of his way to ensure he has a dignified death at home, much to the fury of Jordan and the oncologist.

Despite Dixie’s reservations, Jeff agrees to let troubled teen Karl shadow them at work. Initially reluctant, Karl and Jeff soon start to bond, but, when daredevil teenage girl Vix turns up at the ED, will she entice Karl to return to his former ways?