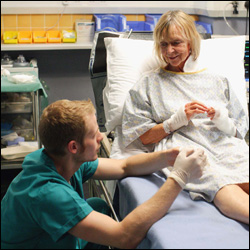 It’s all hands on deck when the Emergency Department faces its cleanliness inspection and the team’s first battle in their campaign to impress the powers that be.

Unfortunately for Lenny he has his mind on other things – namely the gorgeous Chrissie – so he’s late for work and neglecting his duties, incurring Jordan’s wrath.In preparation for the cleanliness inspection, Tess assigns the whole team cleaning duties. Everyone is even more nervous when they hear the inspector is the terrifying “Big Don”. Lenny is late for work again after spending the night with Chrissie, so Jordan puts him in charge of cleaning resus. However, Lenny is distracted when Chrissie visits him at work. Not only does he forget to clean up resus, but he also loses Lorretta, an elderly Alzheimer’s patient. Her husband Roy and daughter Helen are distraught. On top of that Lenny might have just lost them the bacteriology award…

Meanwhile, Adam and Kirsty come to blows when they disagree on how to handle an unco-operative patient who believes he’s dead. Kirsty thinks that by playing up to his delusions is the answer, so she enlists Yuki and Mads to help out. Crucially, while treating him, Yuki discovers that Adam’s diagnosis was wrong; has his insight saved the day?

For a moment, things seem to be on the up, until Holby receives more negative press regarding the day’s events. Henry is furious – they must have a mole leaking information. Lenny is disturbed when he recognises the reporter’s name

In this article:Cas Series 25, Nicola Wilson 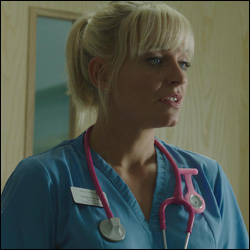