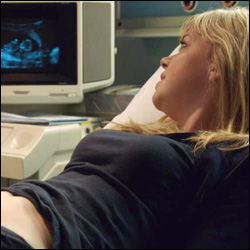 Ruth and Jay’s relationship is stronger than ever, but when a patient describes himself as “damaged”, it strikes a chord with Ruth and her old insecurities start to resurface. After an unsettling conversation with the patient’s mother, Ruth has a major wobble and finishes with Jay.

Linda’s former adversary Damon is back in the ED, along with his baby daughter Evie and her new foster mother. Violent Damon has realised that Linda previously lied to him about Evie’s parentage and makes plans to kidnap his helpless baby daughter.

Meanwhile, fire officer Frank has noticed some potential fire hazards around the ED but an impatient Jordan tells him to lighten up for Christmas. But a plug socket in the basement has been overloaded once too often and soon fire alarms are sounding throughout the building.