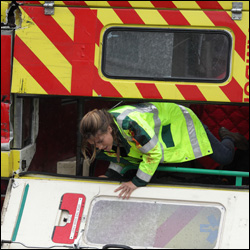 Fast-living, fearless and feisty, Major Sam Nicholls marches into the ED for her new job on secondment. So keen is she to get going that she turns up a day early asking to join a paramedic crew and get a feel for Holby. But Sam soon has to rely on all her army training when an aggressive driver with a grudge rams the ambulance off the road trying to get at the patient inside…

Meanwhile, Noel is keen to step up his security after a run-in with an angry patient. But a sensitive encounter with grieving mother Seonaidh convinces him that he doesn’t want to be shielded from the public after all.