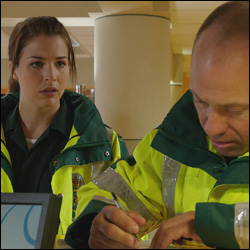 Tamzin’s refusal to treat a drunk and abusive patient has serious repercussions and Tom, Sam and Dylan must all find a way to work together to treat a family with a rare genetic disorder.

Professional footballer Jay is upset that his team lost, and as he drives home from the game, he throws his girlfriend Nicole out of the car on to the side of the road in a rage, only to return shortly after. But he has been drinking and, as he drives the wrong way up the motorway, he crashes into an oncoming car.

Jeff and Tamzin attend the scene and, as Jay’s behaviour becomes more abusive, Tamzin makes a decision that could have devastating consequences for her career and friendship with Jeff.

Meanwhile, Tom and Sam treat a patient with suspected Morquio Syndrome, and as they clash over the right course of treatment, Dylan reveals he saw them kissing on Halloween.

In this article:Cas Series 27, Dana Fainaru